Colby-Pulver House Closed until further notice but the gardens are open anytime! 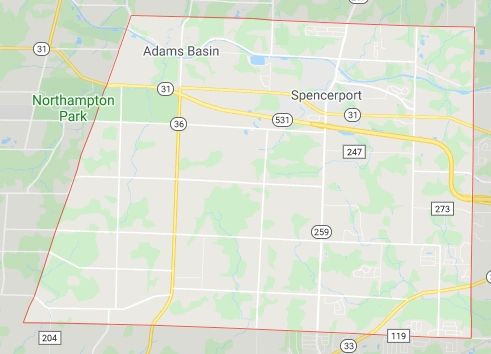 A SCAVENGER HUNT OF PEOPLE, PLACES & THINGS IN THE TOWN OF OGDEN

1.  From 1908 to 1931 the Rochester, Lockport & Buffalo interurban rail line ran east west thru Spencerport.  Which village street has the tracks buried under the asphalt?

2.  The cannon from Fairfield Cemetery misfired and was split.  It got a second life as a hitching post.  On which quiet village street, north of the canal and east of Union Street can it still be found?

ANSWER: Expressions of Dance By Lisa

4.  The Lincoln House Hotel, torn down in the 1950's, stood on Union Street along the south west bank of the canal.  What two things are there now?

5.  The oldest store in the village, sells items so unique.  Write down their address number and then let's have a peek.

6.  A building on Main Street, that was once a bank, had it's front moved from Rochester.  Which building is it?

7.  The building at the corner of Union Street and West Avenue was once the Village Building.  It housed the Spencerport Fire Department, Ogden Farmers Library and had space for meetings.  What was the steeple used for?

8.  From his lumber yard east of South Union Street near the canal, Mr. McCabe supplied Ogden's building needs.  What is the lumber yard called today?

9.  The Moore family ran a coal business and later an Insurance Company north of the rail line on the east side of Union Street.  What stands there today?

10.  She waits by the first high school to walk her brothers home.  Find the address on the sign, you won't have far to roam.

11.  Spencerport Post Office has moved several times in it's history.  In 1907 it moved across South Union Street into the Upton Block opposite Amity Street.  What is the name of the business there today?

12.  I've never been to Texas, but I can go there for lunch.  Eat a potato the size of Dallas, it packs a counter punch.  What's the address?

13.  Ever see a soiled coat, be it red or green.  Take it to the proper store so it can be come clean.  What's the address?

1. How many flag poles are in front of what was once the Trowbridge Middle School?

2. Terry Taylor school has how many blue doors across it’s front?

3. What does Canal View Elementary School have a view of?

4. In what year did Leo Bernabi Elementary School shine across the nation?

ANSWER: As a blue ribbon school, in 2013 it was awarded as a National School of Excellence.

5. Who is the Rangers Baseball Field A named for?

6. Which Spencerport School resembles a drive in?

8. Which Spencerport Elementary School is mere feet within the town of Ogden?

9. Which Spencerport School is not within the Village boundary?

ANSWER: all of them are outside the village limits.

10. Which school is your education partner of choice?

1. The wooden tower behind the Colby Pulver House was removed to make way for what brick building in the village?

3. Let’s go to the Depot and get ourselves a book, Write down their numbers, not on a page, to find them you’ll have to look.

4. Does the Canal flow to the east or west?

5 . Name the three flags flying from the lift bridge in Adams Basin.

6. How long is the towpath from the Trimmer Road bridge to the Martha Street Bridge?

ANSWER: just about one mile

7. What is the majority of the canal lined with?

8. How many boats can connect to electric and water in front of the Depot Museum?

9. How many boats can connect to electric and water by the gazebo?

10. How many picnic tables are near the Bridge Tenders Tower in Adams Basin?

2.  How many picnic tables are at Ogden Heritage Park?

3.  The plaque at the Ogden Veterans Memorial recognizes how many that served in the Korean Conflict?

4.  Which Adams Basin Park is on the north bank of the canal near where a canal bridge once stood?

5.  What grows at Springdale Farm?

6.  How many Eagle Scouts have worked on the Rose Turner Park on Big Ridge Road?

7.   When was the Clyde Carter Memorial dedicated?

8.  Whose home is commemorated by a NYS Historical marker near the intersection of Canal Road & Washington Streets in Adams Basin?

9.  Who is the clock in the park, on the north east bank of the canal at Union Street, dedicated to?

9B. What is the name of the park in question 9?

10. Which Grand Army of the Republic Post was the Civil War Monument in Fairfield Cemetery dedicated to?

1. Dewey Street changes to which street at the Ogden Town line?

2. What stands near the stones on top of Woodchuck Hill? Hint: Ogden Center Road

3. What is the name of the store in Town Pump?

4. In what year was the need for Ogden Parma TL Road established?

5. How many bridges cross the canal in Ogden?

6. What are the names of the two tallest Daylilyʼs at the Colby Pulver House?

7. Spencerport American Legion collects worn American flags for proper disposal. What do they collect them in?

8. What year was the Ogden Farmers library established?

9. What road is the westernmost boundary to the Town of Ogden?

10. What Ogden homestead, on the towns eastern border, uses a vintage truck to hold their sign?

1. Which village church is made from stone and painted clapboard?

2. Where is the bell at the Presbyterian Church?

ANSWER: hanging from an arch in the lawn at the front door

3. How many steps lead to the front door of the Trinity Lutheran Church?

4.  Which village church has a large rosette window?

5.  What type of roof keeps the weather out of St. John’s church?

6.  How many stained glass windows are in the Ogden Baptist Church?

7. How many banners welcome you to the Calvary Chapel Westside?

8.  Which Ogden church is south of the golf course on Trimmer Road?

9.  Which Ogden church is part of a Cambodian & Nepali Ministry?

10.  Which Ogden church is across the street from a Little Red Preschool?

1. Which Ogden cemetery is memorialized behind Kitchens by Countryside?

2. Ogden has 10 Cemeteries. Where is the one   named after the original settlement. Hint: Daniel Spencer rests   there.

3.  In the Colby Street Cemetery, obelisks mark the graves of the Colby brothers and   tell the stories of their lives. Where were the Colby’s born?

5.  Confederate soldier Dewitt Clinton Guy rests with his wife and her family in Fairfield   Cemetery. What was his wife’s maiden   name? Hint: VIII - D

6.  Hubbell Road is named for an Ogden resident & Civil War POW buried in Maple Grove   Cemetery. Who is he?

7.  Frances Willard, founding member and president of the WCTU, was born in Ogden in 1839. Her uncle is buried at Maple Grove Cemetery. What is his name?

8.  Tangelwood Cemetery on Brower Road is also know by another name. What is that name?

9.  Who is the Revolutionary War Major buried in the cemetery on Washington Street,   south of the canal, in Adams Basin?

9B.  Name   the Cemetery in question above.

10.  Locust Grove Cemetery is the final resting place of which Adams brother who, in   1827, established a Tavern and Inn on the Erie Canal towpath in Adams   Basin.